All of the show’s episodes – three heats and a grand finale – were shot in one afternoon on one of White Light’s turnkey SmartStage xR facilities, adhering to government guidelines following the outbreak of Covid-19. Three contestants who appeared remotely on each weekly show were eliminated from play – or “disconnected” – for wrong answers until the winner emerged in the finale.

“Although Tom and his team were well versed in creating television productions and game shows in a traditional broadcast environment and using real-time content engines, this was the first time they had exposure to working in an xR environment,” says White Light Technical Solutions Director Andy Hook.  “One of the main advantages of working in xR is how instantly familiar the environment becomes; minimal on-site inductions/rehearsals were required helping to keep studio time to a minimum.  It’s so much easier than working in a greenscreen environment because the content is there to see and interact with.”

White Light’s SmartStage solution gave Tom and his team the ability to arrive on-site, load up the latest version of their content and immediately start shooting with the White Light team handling the technical aspects.

“The power of the SmartStage, disguise’s xR workflow, and content made in a real-time engine meant that we could ‘place’ the studio exactly where we wanted it to suit the required camera shots - rotating, scaling and tweaking the design in moments without needing to render out any new content, all within moments of arriving on-site,” Andy explains.  Everything was recorded live and straight to disk for minimal post production and editing.

Andy notes that disguise xR’s pre-visualisation features allowed Tom and his team to see how their content would look on-stage and work through design iterations without requiring the physical stage or studio.  This was further facilitated through weekly video conferences with the whole team during pre-pro.

The “Disconnected” virtual set found Tom and the three contestants atop a broadcast tower with the host on a catwalk and the remote participants appearing inside screens suspended from the infrastructure.

Each of the four episodes (which you can watch here) feature an ad-break where Tom provides various behind-the-scenes tours of the show’s virtual set to help his fanbase understand the different elements of the technology that made the show happen.

Stay tuned for our case study, exploring the project in more depth. 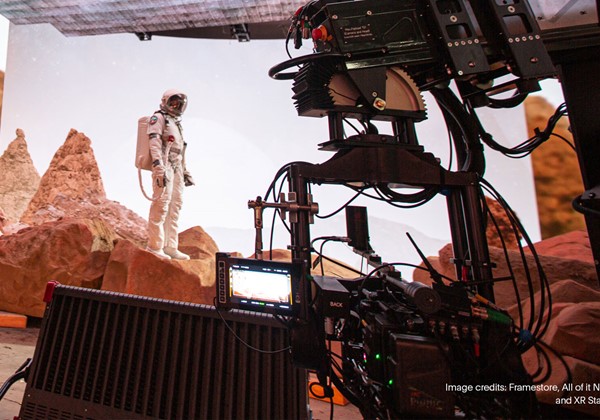